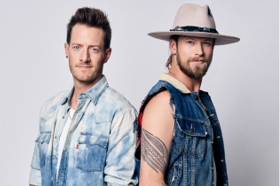 This week’s blog is about one of my all-time favorite bands, Florida Georgia Line. I have to tell you a back story about these guys because I actually knew them before they got huge. In my other life, I worked as a Director of Sales for hotels and I used to book these guys their rooms at cheap rates when they were just starting out. We mostly communicated via email or twitter. I recall it being right before Cruise hit #1 which was their GOLD MINE hit and still my ultimate favorite tune from them! So, once they hit big, they no longer needed my help. That’s ok. I was very proud of them however, I did make sure to rub it in that they were forgetting us “little people”. When I lived in Nashville, I heard the guys would be performing at a venue called Exit In. It was sold out in seconds however, determined to see the guys, I went in hopes there would be some “no shows” and I could get in. It was a cold, no FREEZING night that night. I waited outside until the bouncer felt bad enough for me and let me in for free. (Sweet!) After the show, I managed to get back stage and went to surprise the guys. Brian, recalled me immediately and said, “I know you.” I said “yes, you did then you got all big”…and he said “hey darlin’,” nice to see you” We then took these two photos, had a shot of moonshine Tyler was passing around then I headed home. Mission Accomplished!

Many years later, I still am so proud of their success and amazed at all the tattoos they each now have. But enough of all that, right now I want to talk about their latest song “I love My Country” that was just released on March 23, 2020.

Classic FGL is you ask me. Also, perfect for summertime. This is their first song off a future fifth album. The guys shared in Instagram how they feel this is the good feeling song we all need now in times like this. I could not agree more.

“It’s time,” Hubbard chimed in. And the song’s jolly tone — with references to fishing, barbecue and a lakeside hang — could be relieving during this “uncertain time,” Hubbard continued.

Give it a listen here:  https://www.youtube.com/watch?v=2sqTi-pmrNs